So kids can keep learning from home!

JOIN US ONLINE
Back to archive

Code in the Stars with Astro Pi

When kids get asked who they’d like to be when they grow up, the ‘astronaut’ response easily falls into the top three. Dreams of boarding a rocket, floating in zero gravity and travelling to space are no stranger to a child’s mind. But whether or not they ever break the Earth’s atmosphere one day, kids all across Canada now have the chance to get one step closer to space.

Kids Code Jeunesse is taking part in Astro Pi: Mission Zero — an annual challenge collaboratively launched by the European Space Agency and the Raspberry Pi Foundation that gives the opportunity for young coders to launch their code into the cosmos. Using a special version of a Raspberry Pi microcomputer that can easily function in space, students under 14 years old can team up and create a coding project that will be sent and displayed on the International Space Station (ISS). Messages or images programmed at school or in the comfort of your own home will be seen by the astronauts on the ISS and will contribute to their daily routine. Here’s your chance to brighten their day! 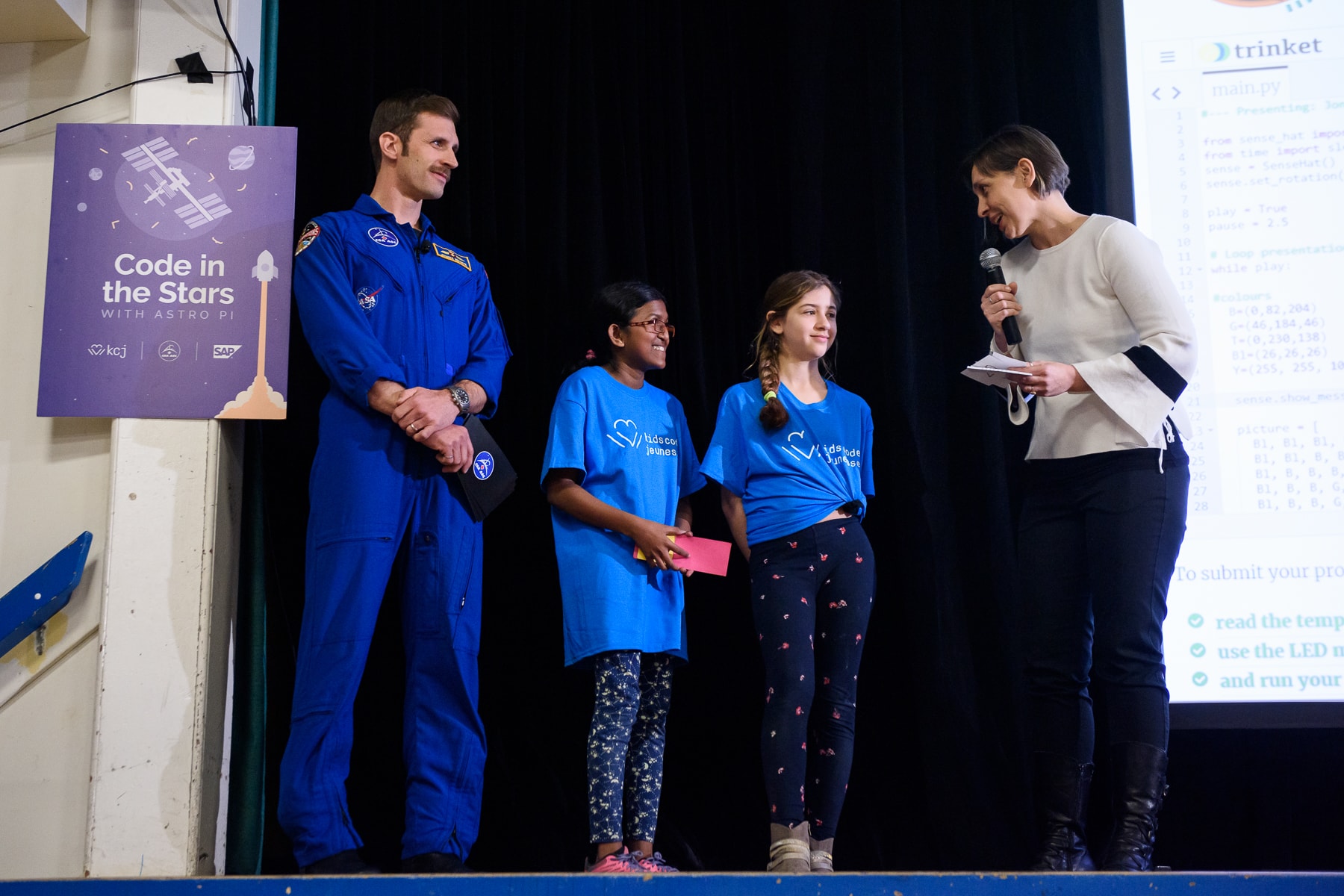 The project has been open to kids in Canada for two years now, and for the 2018-2019 edition, we partnered with the Canadian Space Agency to give young coders on this side of the world the chance to participate in the challenge with Code in the Stars. To inspire and encourage students across Canada, we decided to launch our take on Astro Pi with various initiatives that would connect them with the project’s Canadian ambassador — David Saint-Jacques.

An engineer and astrophysicist from Saint-Lambert, Quebec, David Saint-Jacques flew to the ISS for his first mission in December 2018 to conduct scientific experiments and explore new technologies. He has now spent nearly 80 days in space, and students in B.C. recently got a peek of what that’s like.

On January 31st 2019, the gymnasium at Lord Selkirk Elementary School in Vancouver B.C. was brimming with curious and excited students. Together with their teachers, they gathered at the school that day to speak with an astronaut, and not just in any way, but live from space. In an organized effort with the CSA, we kicked off our Astro Pi season with a live Q&A period between students at Lord Selkirk and David Saint-Jacques, where they could get answers to anything and everything space-related straight from the source.

The question period was facilitated by another special guest, CSA astronaut Josh Kutryk. He stood on stage and mediated the conversation as kids stepped up to the mic and voiced their curiosities to Saint-Jacques, subtly floating on the big screen in front of them.

Fifth-grader Owen was the first to question Saint-Jacques, politely addressing him as ‘captain.’ Reading off of a cue-card, he went straight to the point: "Do astronauts need to know how to code?" To our delight, Saint-Jacques' answer was a strong yes.

Other questions included “How long did it take to adapt to microgravity?” or “How does the research in space help prepare to send humans to journeys tomorrow and beyond?” and the conversation lasted around 20 minutes overall. Our senior director, Indra Kubicek, said that the initiative was a success.

“It was such an amazing honour to launch the Astro Pi challenge in Canada this year. Seeing Canadian astronaut David Saint-Jacques communicate directly from the ISS with a very happy bunch of children at Lord Selkirk Elementary in Vancouver, B.C. really brought coding and space to life and was truly an out of this world opportunity!”

To hear more of the student’s questions and Saint-Jacques answers, check out the full Q&A right here.

Apart from chatting with Saint-Jacques, the students also participated in an unplugged activity and got to checkout the school’s best Astro Pi projects on display. But Lord Selkirk was just the beginning. From February 9th until March 16th, we’re running Astro Pi workshops throughout the country where kids can be guided through the project with the help of a KCJ instructor. And don’t you think we forgot about the adults — we created a webinar and we're giving away free coding kits to make sure that teachers and parents are well-equipped to help their students in the classroom and their children at home on their journey to send code into the stars.

Whichever way you’re participating, we hope that you get the chance to celebrate space with us through Astro Pi and David Saint-Jacques’ mission!

CanCode: A Year in Review

Code in the Stars with Astro Pi

Code in the Classroom: A look into KCJ’s micro:bit workshop

Or keep in touch with our newsletter: