Virtual Code in the Classroom workshops are here!

Teachers, bring KCJ into your classroom via live webinar for an interactive introduction to coding or AI.

BOOK NOW!
Back to archive

Innovating with tech in the Land of the Midnight Sun

How one educator brings code, creativity & curiosity to a Yukon school!

The past school year was rife with uncertainty, but we saw educators, families, and communities come together to keep kids learning. Working with unpredictability is pretty standard for Canadian educators in remote communities.

For Mr Michel Emery, teacher librarian and EdTech teacher at F. H. Collins in Whitehorse, there’s no challenge that can’t be overcome with innovation. It’s this kind of thinking that led him to receive the Prime Minister’s Award for Teaching Excellence, in 2018.

Michel Emery working with his students.

With a population of 25,000, Whitehorse is the capital of Yukon, and the largest city in northern Canada. That said, it’s almost 2,000km to Edmonton, the nearest major Canadian city. This makes inviting experts in the classroom or visiting major museums a bit tricky!

In the two decades that Michel has been teaching, he’s found 3 key tricks to keep kids learning, regardless of what’s happening outside.

Creating space for kids to be curious, to create

Michel’s interest in STEM started during his undergraduate studies at The University of Ottawa. He saw that the technological revolution of the workplace was not appearing in schools.

“As teachers, our role is preparing students for the future. I wanted to infuse more of this technology [from the real world] into the classroom so students would graduate with a wide range of skills that they could use and apply in their careers.”

Michel led the transition from Library to Learning Commons at his school. The FH Learning Commons has computers and breakout spaces, as well as other tech resources such as robotics, tinker kits, 3D printers, VR Gear, iPads, 360 cameras and 3D scanners. These are all available for students to use for various projects.

Michel is often on hand to mentor, and guide kids to the resources they’re looking for, but it’s primarily a self-led space. Budding STEM evangelists undergo “training” to become Student Experts, who help their peers use the resources.

“When I teach coding classes, many students will have some apprehension. Kids - and people in general! - have the perception that coding is ... hard, and out of reach for them. But once they start using various coding programs ... they get excited and want to learn more! The coding programs that are available in schools are scaffolded really well and are actually quite fun to use.”

Situated next to a forest on the banks of the Yukon river, Michel loves to use technology to engage the kids in the space outside of their classrooms.

Using the app Survey123, Michel and an intrepid class of explorers set out to geotag and gather data from the forest - all using students’ cellphones.

“We’re always looking for ways to have students use their devices as a research or data-gathering tool. Using Survey123, we created a data questionnaire. The student’s task was to … find different species of plant and fungi in a specific area. Students had to take pictures of the species, gather data on height and other characteristics, and record their geolocation. All of this data was then automatically imported in a collaborative map. We now have a dataset of our area, and we can use this data year after year to monitor change.” 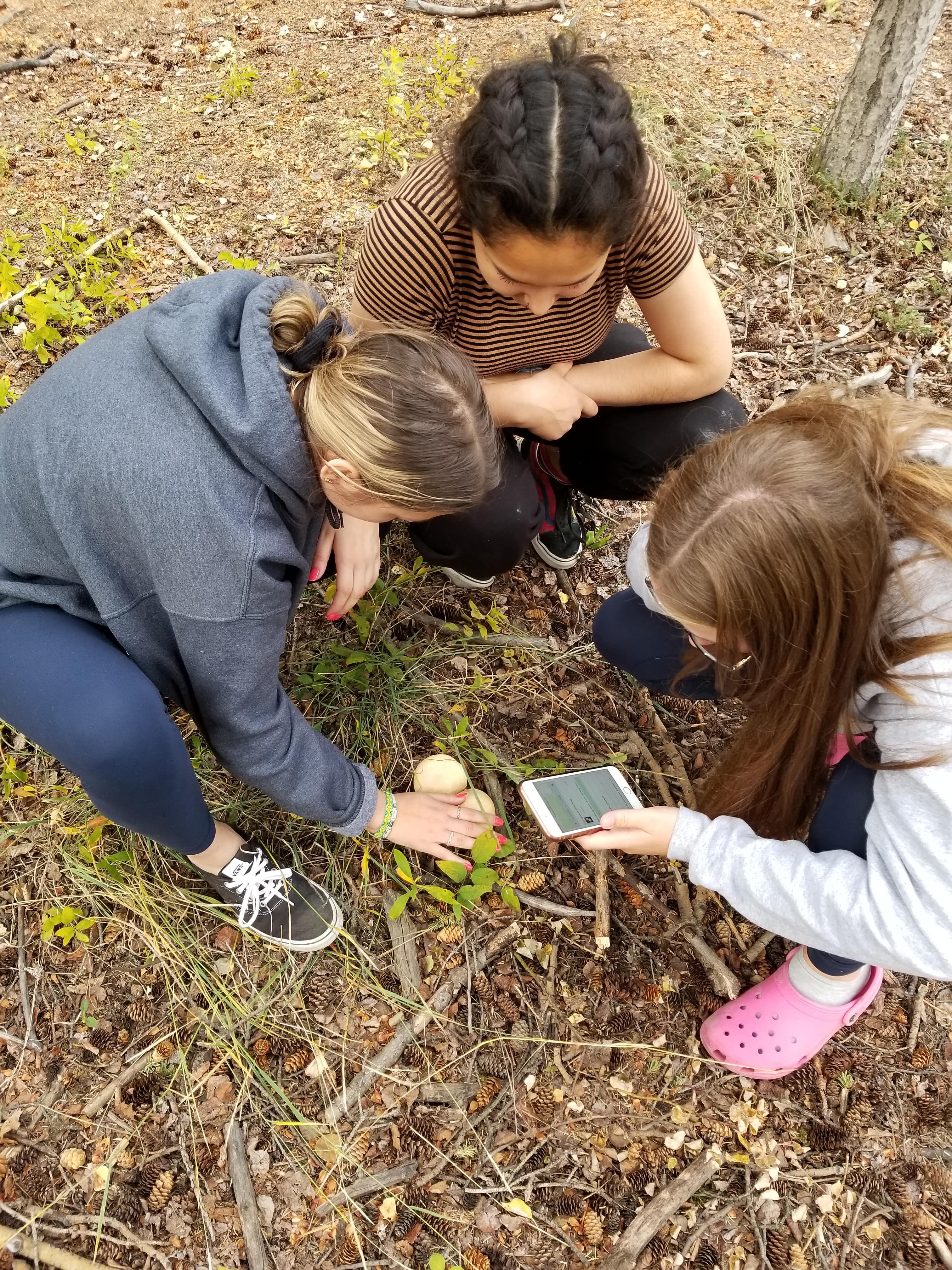 Students using their cellphones to collect data on the plants near their school.

Like grown ups, kids aren’t generally excited about tasks that seem “pointless.” Showing them how tech intersects with the real world is a neat shortcut to get them engaged.

One of Michel’s favourite projects came after he brought a 360° camera to class. Many remote communities in the Yukon lack a local high school, so students move to a residence in Whitehorse during the semester.

“Students living at the residence used the cameras to create a virtual tour so that families, and kids that are coming in future years, have an idea about where they will be staying... It was made by students, for students!”

After finishing the VR tour of the residence, students began working on a tour of the school - in an impressive 4 languages. “We replicated that success story and multiplied it to showcase our school and the programs we offer!”.

Students capturing footage of their school using a drone.

Michel frequently finds opportunities to scale up innovation. One teacher had a glut of broken keyboards. Electronic waste has to be trucked out of the Yukon, which is hardly environmentally friendly. So Michel formed the Green Tech Squad.

The squad set about removing all the remaining keys to create letter tiles. These proved popular to create games to learn languages.

Left with the remains of the keyboards, Michel plied the aluminium skeletons off of them. It was now in the hands of students.

“They made book holders, iPad stands, some of them made pencil holders - we’ve even used them to make shelves!”

This opportunity to apply innovative thinking to real-world problems was a great way to furnish the Learning Commons. Even better - it improved the confidence and self-esteem of students.

While being remote can limit the places you get to - technology can bring a lot of exciting new opportunities your way.

With the internet, the world is at your fingertips

This is not to say that teaching in the Yukon is without its challenges. Unlike the big city, there are fewer opportunities to access experts to give talks, fewer field trips opportunities compared to big cities, and lower bandwidth that limits online devices.

For Michel, one of the most rewarding aspects of teaching here is using STEM to bring the world to students.

“Using various technologies, we can access experts not just in Canada but all over the globe ...

There’s also more and more ways you can use unplugged technology to circumvent the challenges of limited bandwidth. You can download various Google Expeditions onto school devices and bring the world into your classroom to enrich the learning experience. You can bring your students on field trips that were never possible before like inside a volcano, on the space station, inside a virus, in ancient Rome, at Vimy Ridge, without jet lag or airfare costs!”

This access to the outside has helped manage the peace in many households during the most restrictive periods of lockdown. Hopefully, it will continue to inspire more educators as this school year evolves.

Some of the exciting experiences that Michel has created for his students include:

Technology is one of a set of tools to teach with. It creates interactive experiences to help students of all abilities to engage with content in a different way. Best of all, it’s exciting!

Feeling inspired to bring coding or computational thinking into your classroom? Educators can now book a virtual Code in the Classroom webinar with a KCJ instructor! In this hour-long tech exploration workshop, students and teachers can get an introduction to AI, micro:bits, or Scratch. Thanks to CanCode funding, we’re able to offer these workshops for free! Teachers can also check out our Educators page to browse our regularly-updated educational resources and sign up for upcoming webinars.

KCJ Catches up with... Lei Lopez

The #kids2030 Challenge: How small changes can have a huge impact

Innovating with tech in the Land of the Midnight Sun

What is Scratch coding & why do kids and educators love it?

How we’re integrating the SDGs into our teaching at KCJ

The best of KCJ straight to your inbox, once a month.

Kids Code Jeunesse is an educational initiative by Digital Moment.